All the restaurants with an asterisk (*) after the name and the text "Looking forward to eating here." at the end of the note are places I would like to visit that friends, blog posts, articles, TV shows, etc. recommend I eat.

2 Amy's Neapolitan Pizzeria is a bustling wood-oven pizzeria serves innovative Neapolitan-style pies and Italian wine by the glass. They were the first certified Neapolitan pizza place in the United States. Their wood-fired pizza is the best, but their side dishes are even better. The meatballs cooked in the wood-fired oven are fantastic along with the rabbit stuffed with baby broccoli rabe and many more items that change with the season.

A. Litteri's is an old-school Italian grocery store and deli drawing foodies for meatball subs, homemade sausages and more. Their selection of pasta, olive oil, etc. are vast. The main reason I have been going back is for their cured Italian meats along with the service. The other things I have been known to order is their meatball sub, but my favorite is the create your own cured meat sub. When I order my sub with all the extras, it costs me about $13 or $14, but it's enough for two or three meals.

At American Eats Tavern renowned chef José Andrés pays tribute to America’s culinary legacy, celebrating some of the country’s most iconic dishes and incorporating a delectable array of native ingredients. NOTE: They have multiple locations.

Amsterdam Falafel serves Falafel with pita bread plus Middle Eastern salads and Belgian fries at the late-night quick-serve eatery in Adams Morgan part of Washington, DC. You can get a large or a small Falafel. The difference is the small has three Falafel balls, and the large has five. Once you have chosen which you want you can pile on the extra ingredients until there is no more room. I suggest crushing the Falafel balls to make more space along with it allows you to spread them out inside the pita bread. NOTE: They have multiple locations.

Beefsteak is a fast-casual chain from José Andrés' restaurant group specializing in flavorful veggie and grain bowls. If more restaurants made vegetables like this, I would eat more of them. I ordered their beetsteak burger which is a vinegar marinated half an inch to three-quarters of an inch sliced golden beet on a toasted roll along with their special sauce some lettuce greens. Or order their beefsteak tomato burger which is similar to the beetsteak burger. The other thing I ordered was their gazpacho salad which was a bunch of different greens, nuts, etc. and then cold soup poured over everything. NOTE: They have multiple locations around the DC area and a few other national locations.

Jaco Juice and Taco Bar is a juice bar serving health-minded breakfasts and Mexican street food in upbeat surroundings. They can make any burrito into three tacos which are huge and can be made into four or five comfortably. You should order the Hot Mess burrito which is scrambled organic eggs, sausage, potatoes, roasted red peppers, caramelized onions, and blended cheese. I enjoyed the fish taco which has North Atlantic cod, pineapple salsa, cabbage slaw, roasted poblano crema, and tomatillo salsa along with a Baco Taco that contains chunky guacamole, sauteed onion, pico, sweet corn, cotija cheese, roasted poblano crema, and tomatillo salsa.

Stachowski's Market is a butcher shop offering fresh and cured meats and cheeses, plus sandwiches along with roast chicken to go. You need to get the four meat grinder or the Braunschweiger: house-made liverwurst on rye with onions, mustard, and sweet pickles. Another of their great sandwiches is their 'Four Meat Grinder' (sandwich) which contains capicola, mortadella, salami, soppressata, lettuce, pickled red onion, tomato, provolone, hot peppers, and more. 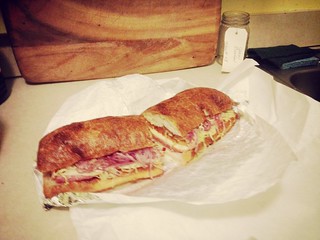 Steak and Egg Kitchen customers belly up to the counter or sit outside at this no-frills 24/7 breakfast and burger spot. It's a nice whole int he wall that always open. I need to get back here one of these days it's been a while if not a few years.

The Well Dressed Burrito is a compact space with limited hours turning out classic Mexican fare for the weekday to-go lunch crowd. After waiting over a year finally made it about 15 minutes before they closed and ordered the pulled BBQ pork burrito with lettuce, rice, and cheese along with their medium sauce. NOTE: They are only open Monday through Friday from 11:45 AM to 2:15 PM.

Return to Top of Page